Life on the Douro: A Documentary about Wine and Culture 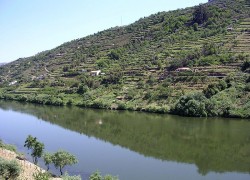 The documentary “Life on the Douro,” produced and directed by Zev Robinson, was released in the United States and will be shown in California in mid-November, including Los Angeles on November 15 and San Francisco on November 17, 2011. The screenings are followed by wine tastings and seminars.

The 90 minute film documents about 300 years of history of wine production in northern region of Douro River Valley considered Europe’s most beautiful river.

Twenty eight people involved in the wine production were interviewed about the various aspects of winemaking and their family histories were told some of them centuries old.

The film travels across several generations, beginning in the 17th century to the current day, in a series of stories by wine makers themselves, large and small.

Start being produced one year ago, the documentary, comprising of 13 episodes, was premiered in the United State at the Douro Film Harvest Festival at the Vidago Palace, on September 6.

Zev Robinson is a Canadian-British film maker currently living in Spain. He has produced a number of documentaries on wine as a form of culture, history and economy. Two of his well-known works include La Bobal and other stories about wine and Dinastia Vivanco: Giving back to wine what wine has given us.