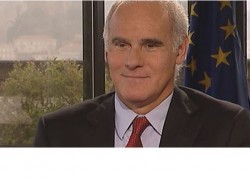 Ambassador João Vale de Almeida, the Head of the Delegation of the European Union to the United States, will visit Massachusetts’ Bridgewater State University and University of Massachusetts Dartmouth on Friday, August 9.

Vale de Almeida will visit Bridgewater State University for a luncheon at the Heritage Room in the Maxwell Library starting at noon. Later that afternoon, the ambassador will visit UMass Dartmouth for a tour of the Ferreira Mendes Portuguese-American Archives and hold a public discussion at the Grand Reading Room of the Claire T. Carney Library.

At the UMass Dartmouth, Vale de Almeida will speak on the topic of “European Union and the United States Relations.” Open to the public, the event is scheduled to start at 3:30pm followed by a reception at 4:30pm.

He holds a degree in history from the University of Lisbon and has studied journalism and management in the United States, France, Japan, and the United Kingdom.

Prior to his appointment in Washington, he served as the Director General for External Relations at the European Commission, the European Union’s executive body.

He presented his diplomatic credentials to US President Barack Obama on August 10, 2010.