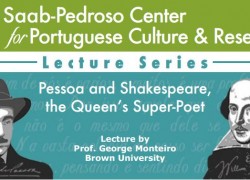 The Department of Cultural Studies and the Saab-Pedroso Center for Portuguese Culture & Research have announced the launching of the Portuguese studies program at the University of Massachusetts Lowell.

The newly created program, directed by Professor Frank F. Sousa, will offer Portuguese language and culture courses in Academic Year 2014-15, with the aim of eventually establishing a minor and a Bachelor of Arts in Portuguese.

The announcement is followed by a series of cultural events dedicated to Portuguese literature, Brazilian culture, and Portuguese-American literature.

The series opened today, April 2, with a lecture on Pessoa and Shakespeare by George Monteiro, Professor Emeritus of English and Portuguese and Brazilian Studies at Brown University.

On April 16, an outdoor performance of capoeira will take place by the Associação de Capoeira Mandingueiros dos Palmares (ACMP). The event will be at 12:00 p.m. at the O’Leary Library Quad.

On April 28, Portuguese American author, Katherine Vaz, will discuss her work and read from her forthcoming novel, Below the Salt. The event is at 7:00 p.m. at the ICC.

The creation of a Portuguese program at UMass Lowell has greatly benefited from the the leadership of Chancellor Marty Meehen, Provost Ahmed Abdelal, Dean Luis M. Falcon, and Department Chair Carole Salmon, with support from Elisia and Mark Saab and Luis Pedroso, whose generous gifts in 2013 contributed to establishing the Saab-Pedroso Center for Portuguese Culture and Research.

Visit the Saab-Pedroso Center for Portuguese Culture and Research here.