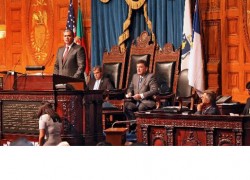 Speaking in Boston, on Tuesday, the President of the Regional Government of the Azores, Vasco Cordeiro, warned Washington that the friendship and cooperation between Portugal and the United States “could be compromised” regarding the U.S. decision to significantly reduce its military presence in the Lajes Air Field, on Terceira island.

He said that the U.S. decision would face “immediate challenges” if the historic legacy between the two countries is not attended with due reflection and consideration. He also expressed his concern for the U.S. intention to gradually deactivate the U.S. Consulate General in Ponta Delgada, on São Miguel island, the only U.S. diplomatic representation in the Azores.

Last year, the United States had informed the Portuguese government that the future of the Lajes Air Field was uncertain and that U.S. Air Force was losing interest in the military facility.  Also, effective June 15, 2013, the U.S. Consulate General in Ponta Delgada, Azores, will cease to provide visa services for visitors to the United States but will continue to provide services to American citizens.

While the non-immigrant visa services will continue to be available in Lisbon, last year it was also announced that, effective March 1, 2012, the U. S. Embassy in Lisbon and U.S. Consulate General in Ponta Delgada would no longer process immigrant visa (IV) or diversity visa (DV) applications.  All immigrant and diversity visa interviews and adjudications for residents of Portugal will take place at the U.S. Embassy in Paris, France.

Praising the close political and institutional relationship between the two countries which share “values and goals” resulting from “six decades of American military and civilian presence” on the Azorean archipelago, President Vasco Cordeiro warned that “in the immediate future, such deliberations should be cause for careful reconsideration.”

President Vasco Cordeiro was presiding as the guest of honor, to the 29th Heritage Day of Portugal celebrations held in the House of Representatives of the Massachusetts State House.