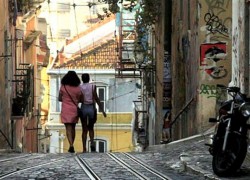 The Portuguese language film “All is Well” [Por Aqui Tudo Bem] , directed by Angola native Pocas Pascoal,  won the top honors for best narrative film at the 18th annual Los Angeles Film Festival, held on Sunday at the Grammy Museum.  The movie was awarded a $15,000 prize.

Set in 1980, “All is Well” tells the story of two sisters struggling in Lisbon after fleeing civil war in Angola. Left to themselves, they must learn to survive in a foreign city.

Born in Angola in 1963, Pascoal studied at the Conservatoire Libre du Cinéma Français. In 2002 she mixed with the group of artists of the Cité Internationale des Arts and took part in several exhibitions of contemporary art. In 2003, she directed the documentary Il y a toujours quelqu’un qui t’aime, which was awarded a prize by the Société Civile des Auteurs Multimedia and was selected for several festivals. All is Well is her first feature film.

The 18th Los Angeles Film Festival, which showcases new American and international cinema, kicked off on June 14. The festival is organized by Film Independent, the non-profit arts organization that also produces the prestigious Spirit Awards, traditionally held the day before the annual Academy Awards.

More than 200 features were screen at the festival, including shorts and music-videos from over 30 countries.

Narrative award (for best narrative feature)
“All is Well,” directed by Pocas Pascoal