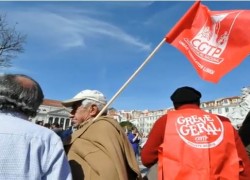 Portugal’s two largest trade union confederations, the CGTP and the UGT, are calling for a general strike for Thursday, June 27. Thousands of workers are expected to take part in street mass demonstrations across the country.

The head of UGT, Carlos Silva, told the press Monday the strike was in opposition to the austerity measures imposed by the “Troika.” He said, “We say no to the dictatorship of the Troika – that is what we are rebelling against.”

The “Troika” is represented by Portugal’s international lenders – the EU, IMF and European Central Bank – overseeing the €78billion bailout requested by the Portuguese administration in 2011.

To meet the bailout targeted austerity measures, the Portuguese center-right government of Prime Minister Passos Coelho is proposing further cuts in workers’ pay and changes in labor policies, including an extension of the working week from 35 hours to 40 hours and an increase in workers’ contributions for the national public healthcare system.

The administration is also proposing changes in its labor policies for public employees.  A proposed plan, which contemplates the elimination of 30,000 civil jobs, or 5% of the country’s 600,000 public employees, will also increase working hours in the public sector and will raise the retirement age of civil workers from 65 to 66.

“We are doing this for our country, and we hope that all Portuguese will join us to show our discontent against austerity,” said Carlos Silva.

On November 24, 2011, a general strike called by CGTP disrupted the transportation sector, including air traffic. The Portuguese airport authority, ANA, recommended that passengers confirmed any flights booked for the day, after both TAP Air Portugal and SATA Air Azores canceled about 50% of their scheduled flights. The strike also affected traffic at the Portuguese sea ports.

The last general strike in Portugal was jointly convened by the CGTP and UGT trade union confederations on November 24, 2011.  The CGTP, the country’s largest trade union federation, represents about 750,000 workers in 81 unions, while UGT, with about 500,000 members, represents 58 unions.

This will be the third general strike that convenes both confederations in recent years and the seventh general strike staged in Portugal since the revolution of April 1974, which reinstated democratic rule in the country. Over the last 31 years, CGTP has convened nine general strikes while UGT has called for three.