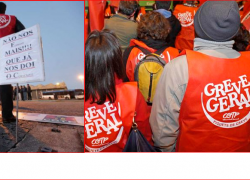 Public and private sector labor unions in Portugal are joining a general strike scheduled for November 14, with the slogan “Against Exploitation and Impoverishment.”

Similar work stoppages are being planned for the same day in Spain and Greece to protest government-imposed austerity measures and labor reforms.  Action was also called by the European Trade Union Confederation (ETUC).

Members of the union representing Portugal’s urban police force (PSP) demonstrated in Lisbon on Tuesday while eight civil aviation unions have said they will join the strike November 14 to “defend Portugal’ and the rights of the workers they represent.

Portuguese flag carrier TAP Air Portugal said Monday it was advising passengers booked on flights foe 14 November 14, the day of a general strike in the country, to change flight dates to avoid any inconvenience.

Portugal’s parliament approved last week the state budget for 2013 with the biggest tax increases in the country’s modern history.

These include raising tax rates on income, property and financial transactions. Some households will see tax increases equivalent to two months’ salary.

The budget for 2013 also predicts unemployment will rise further to 16.4 percent next year from  current 15 percent.

The protests will take many forms in Portugal, including stoppages, strikes and political rallies, throughout the morning and evening across the country.

Although Portugal’s second major trade union confederation, UGT, has not confirmed participating on the November 14 general strike, several of its affiliates have decided to join the protests.

In addition, some independent trade unions have also confirmed they will take part in the strike, including the Rural Workers Union of the municipal area of Lisbon, and the Union of Tax Workers (STI).

The Portuguese administration was given one more year to reduce its deficit, after the latest quarterly review by international lenders of the EU, IMF and European Central Bank overseeing its Euro78billion EU bailout.

The last general strike in Portugal was jointly convened by the CGTP and UGT trade union confederations on November 24, 2011.

The CGTP, the country’s largest trade union federation, represents 727,000 workers in 81 unions while UGT, with about 500,000 members, represents 58 unions.