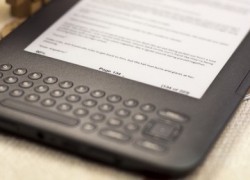 The latest version of the Kindle, the Amazon.com digital device, has incorporated a Portuguese language dictionary, the result of an agreement signed between Portuguese publisher Priberam and Amazon.com.

Carlos Amaral, Priberam manager, revealed the agreement was signed with Amazon.com about two months before the new Kindle was released.

According to Amaral, those who own the new device will have immediate access to the Portuguese dictionary, which didn’t happen before. “For the first time Kindle provides a dictionary of Portuguese that allows users to check the definition of any word that appears in the text, whether written in European or Brazilian Portuguese,” he said.

In addition to the Kindle, the dictionary will also be available on the Kindle applications for other devices such as the iPhone and the iPad.

About the deal with Amazon, Carlos Amaral said,” It’s a license for several years and our dictionary will be on the Kindle from now on throughout the world,” he said.

For Priberam, the business opportunity will have more impact in Brazil, with a market “much larger” than the Portuguese.

“The dictionary already has a great reputation in Brazil,” said Carlos Amaral, referring to 300 to 400 thousand searches per day online, of which 200 thousand are from Brazil.

At the end of last year, Amazon revealed that in the United States, sales of books in digital format surpassed the sales of traditional printed books.