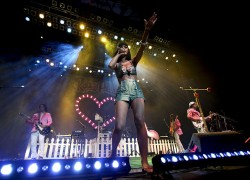 Last week, Portuguese-American pop singer, Katy Perry, became the second artist in the history of Billboards’ Pop Songs chart to take five tracks from a single album to “Number One” with her single hit “Last Friday Night” from her last album “Teenage Dream.”

Katy is now set to score her fifth straight week No. 1 single from the same album. That was done only once by Michael Jackson’s 1987 album, Bad, also produced five chart-topping singles. Many artists have tried to topple the mark since, but few have even come close.

Katy will set a similar record if “Last Friday Night” reaches Number One on the Hot 100 list. Whether or not Katy achieves her goal, she already has made history of her own by holding the record for most uninterrupted weeks in the top 10.

Interview: Katy Perry in Portugal talking about her Portuguese roots