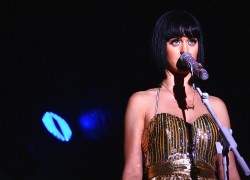 Singer Katy Perry was the biggest winner at the 2011 MTV Video Music Awards with Video of the Year for “Firework”, Best Collaboration, and Best Special Effects. The event took place in Los Angeles, Sunday, August 28.

“Oh, my goodness, thank you so much,” Perry said as she picked up her VMA Moonman statuette for the video that had logged more than 227 million views as of Sunday night. “I’m very proud of the song it stands for.”

In early August, Katy Perry had become the second artist in the history of Billboards’ Pop Songs chart to take five tracks from a single album to “Number One” with her single hit “Last Friday Night” from her last album “Teenage Dream.”

The 26-year-old Portuguese-American singer, who was joined by her husband Russell Brand at the event, wore an Atelier Versace dress, Jimmy Choo heels, and jewels by Lorraine Schwartz.