Kasutera: The cake introduced in Japan by the Portuguese in the 16th century – Heritage 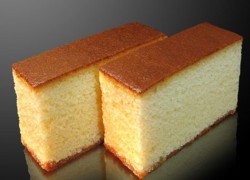 The popular Japanese sponge cake, Castella or Kasutera, made of sugar, four, eggs, and starch syrup, is of Portuguese origin.

A specialty of Nagasaki, on the island of Kyushu, the cake was brought to Japan by the Portuguese merchants in the 16th century.

The name is derived from Pão de Castela, meaning “bread from Castile. It is somewhat similar to its closest relative Pão-de-ló, also a popular Portuguese cake.

In the 16th century, the Portuguese were the first Europeans to reached Japan. They soon started trade and missionary work there. Nagasaki was then the only Japanese port open for foreign commerce with Europeans.

The Japanese may have felt grateful for the novelties brought to them by the Nanban trade period Portuguese merchants. It has been alledged that they also adopted the word “obrigado” from the Portuguese lexicon –  which in Japanese goes for “arigatō” – to express their appreciation.

Today, Kasutera is made to match the Japanese taste. A favorite of the Japanese people, the cake takes many ingredients such as powdered green tea, brown sugar, and honey. They may also be molded in various shapes. A popular Japanese festival food, called baby castella, is a bite-sized treat. Read more >>