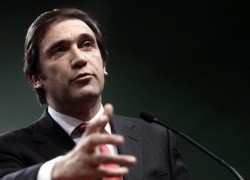 Pedro Passos Coelho (PSD) is the winner of the June 5 legislative elections. He said the vote represented the opnening of “a window of hope for the future.”

José Socrates (PS), in power for six years, congratulated Passos Coelho, conceded defeat and resigned as Socialist Party leader.  He said “This defeat is entirely mine and I want to assume full responsibility for it.”

Exit polls gave the Social Democrats (PSD) between 37 and 42.5 percent of the votes,  ahead of the Socialists  (PS) who scored between 24.4 per cent and 30 per cent. The Christian Democrats (CDS-PP) scored around 11.7 percent, followed by the Communist (CDU) with 7.7 percent and the Left Bloc (BE) with nearly 5 percent.

Voters in Madeira also favored the Social Democrats (PSD) with 49,30 percent of votes, electing  the 4 regional representatives to the National Parliament.

By midnight, with most votes counted, except those cast by Portuguese living overseas, official poll results gave the Social Democrats (PSD) 105 parliament seats and the Socialists (PS) 73 seats. In spite of having won by a margin of 32 seats, the Social Democrats didn’t get the majority needed to form government.

Lacking a majority in parliament, Passos Coelho said he would seek to form a “majority government for the next four years,” pledging to govern in “total transparency” and with “absolute work” to overcome the country’s economic and financial crisis.

However, CDS-PP leader, Paulo Portas,  has acknowledged his party may back the PSD in parliament, rather than forming a coalition, if the two of them had a majority.

While campaigning, Passos Coelho  (PSD) said that after becoming prime minister, he hoped he could reach parliamentary agreements with the outgoing Socialists (PS) on specific policies in the areas of electoral reform, justice, and revision of the constitution.

As unemployment climbs to the highest level in three decades and the economy shrinks, the new formed government will have to cut the budget further and implement additional austerity measures to meet the terms of the 78 billion-euro ($113 billion)  bailout negotiated in May with the European Union, the European Central Bank and the International Monetary Fund.

Passos Coelho, 46, who has never held a government position and considered by many to be inexperienced and untested,  promised to do “everything possible” to fulfill the austerity and financial rescue program inked last month by the outgoing Socialist administration with Brussels and the IMF.

He also said Portugal did not want to be a “weight” on its European and international partners and that fulfilling the three-year bailout program would require “much courage” and “much patience”, but would be “worthwhile”, he added.

Portugal has slipped into a double-dip recession with an economy contraction estimated at 4 percent for the next two years. Unemployment stands at a record 12.6 percent and is forecast to worsen further.

José Manuel Barroso, former Social Democrat  primer minister and the current the President of the European Commission,  said that  “Given the economic and financial situation in the country, I consider this election the most important since the first ballots after April 25.”

For this parliamentary elections, called two years earlier with 17 political parties competing,  absenteeism was estimated at 43 percent, reflecting voter growing disappointment, voter fatigue and the bad weather forecast for much of mainland Portugal. Showers were also forecast for the island archipelagos of Madeira and the Azores. The record absenteeism rate  of 40.32 percent in legislative elections was set in 2009.

Technically, over 9.6 million people are eligible to vote, but these figures are generally considered to be unreliable as the total population of the country is under 11 million according to the Portuguese National Statistics Institute.