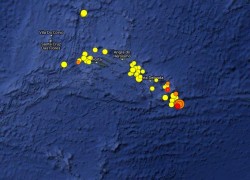 A total of 28 seismic events – the most intense reaching magnitude 1.5 on the Richter scale – were recorded epicenter about 7 miles east/southeast off Graciosa.

Yesterday, June 24, a moderate seismic event – magnitude 5.1 on the Richter scale – was recorded epicenter about 48 miles at sea off Santa Maria island. The event was felt on land on Santa Maria and São Miguel islands.

The last major volcanic eruption was in 1958 in Capelinhos, Faial island, destroying 300 houses and causing the evacuation of 2,000 people. Seismic occurrences are common in the Azores, for the most part registered at sea and not felt by the population.