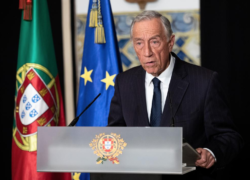 The President of Portugal, Marcelo Rebelo de Sousa, announced today his decision to consolidate the celebrations of the 10th of June, Portugal Day, to a symbolic ceremony at the Jerónimos Monastery, in Lisbon, with just eight invited guests, due to conditions resulting from the COVID’19 pandemic.

“The alternative would have been to include the Armed Forces, hundreds of soldiers, the bestowing of military honors, parades and gun salutes. This, in addition to [invited] personalities, according to protocol, hundreds of personalities, ambassadors, individualities. The ceremony could be kept small or symbolic or having over 500, 600 or 700 people, in a very small space as is the cloister [of the Monastery] of Jerónimos. I had to decide.” President Marcelo explained.

According to the Directorate-General for Health (DGS), this Wednesday the were a total of 1,447 deaths registered and 33,261 confirmed cases of Covid’19 in Portugal, since the beginning of the pandemic. In the past 24 hours the number of deaths in Portugal increased from 1,436 to 1,447. The confirmed cases was the largest increase since May 8, with more than 90% in the region of Lisbon and Vale do Tejo.

While it is only officially celebrated in Portugal, the date is also celebrated across the world in the Portuguese diaspora. In the United States the occasion is marked, coast to coast, with major festivities and cultural events.

Thousands of Portuguese and their families gather around these colorful festivals at many venues across the country.  This year, those celebrations are being cancelled to abide by National Center for Disease Control safety guidelines.

Camões is celebrated for having composed The Lusiads, Portugal’s national epic poem celebrating the country’s historic achievements. The poem is considered to be the most important piece of Portuguese literature and has become a symbol of national pride.

The celebrations involve various military ceremonies, exhibitions, concerts, pageants and parades, and an awards ceremony by the President of the Portuguese Republic. Each year, the President chooses a city to host the official celebrations.

For the Portuguese people living abroad, Portugal Day is the time to display their heritage and ethnic pride. It is estimated that over 5 million Portuguese nationals live abroad, about 1.4 million living in the United States, with a large percentage coming from the Azores. Presently, there are sizable Portuguese American communities in Massachusetts, Rhode Island, Connecticut, Pennsylvania, New Jersey, New York, Florida, Louisiana, Nevada, California, and Hawaii.

583 shares
Share this ArticleLike this article? Email it to a friend!
Email sent!