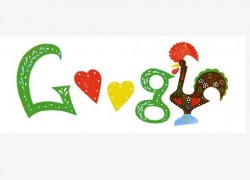 Google users in Portugal will find today,  June 1oth – Day of Portugal ,  a new “doodle” featuring the Galo de Barcelos [Rooster of Barcelos] one of the most iconic representations of the country, associated with Portugal as a tourism destination.

The popular symbol of Portugal originated from an old legend that tells the story of a mythic rooster that saved the life of an innocent foreigner who, while visiting the Portuguese town of Barcelos, was wrongly accused of a crime and sentenced to die.