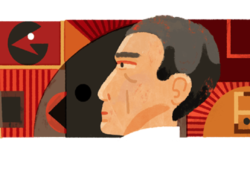 Google Doodle is celebrating today, June 1, José de Almada Negreiros (1893-1970) considered one of the most relevant Portuguese and European artists of the 20th century. 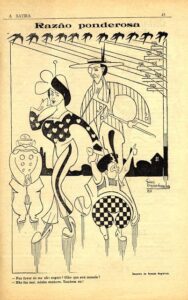 On this day in 1911, Almada Negreiros made his artistic debut at the age of 18 when he published a cartoon entitled “Uma Razão de Peso” in the 4th issue of A Sátira, a Lisbon magazine.

A writer, poet, and painter, he also dedicated his life to ballet choreographies, and worked on tapestry, engraving, murals, caricature, mosaic, and azulejo.

A prolific artist, who was a dancer and a theater performer himself, was born in the former Portuguese colony of São Tomé and Príncipe, to a Portuguese father and a Santomean mother. 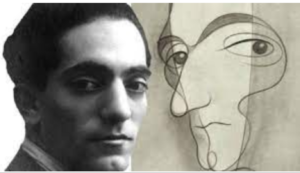 Following his first individual exhibition, in 1913, showing 90 drawings, along with Fernando Pessoa and Mário de Sá-Carneiro, he published poems and texts in the Orpheu (1915) and Portugal Futurista (1917) the arts and letters magazines, which introduced Modernism and Futurism in Portugal.

He always called himself a futurist artist, inspired by Filippo Tommaso Marinetti and other modern artists.