José de Almeida: The leader of the Azorean Liberation Front has died – Azores 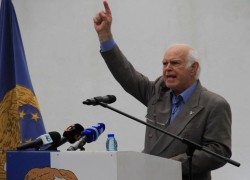 José de Almeida, 79, the leader of the Frente de Libertação dos Açores/FLA (Azorean Liberation Front), the movement for the independence of the Azores, died on Monday, December 1, in Ponta Delgada.

Launched in 1975, after the Carnation Revolution, the independence movement had a profound impact on the Azores and mainland Portugal during the period when the country feared a Communist takeover.

The movement gathered strong support among the Azorean immigrant community in the United States and had the backing of the CIA and the US State Department over concerns to protect US interests in the Lajes Airfield on Terceira island.

Since 1976, after democracy was consolidated in mainland Portugal and a new Portuguese constitution delegated self-rule to the Azores, FLA’s activism has declined. Currently, as defined by the Constitution of Portugal, the Azores is granted its own political and administrative status.

According to the Azores sovereignty law, approved unanimously (2008) by  the Assembly of the Republic, the regional administration comprises of an Executive Branch (Governo Regional) and a Legislative Parliament (Assembleia Legislativa) elected by universal suffrage.