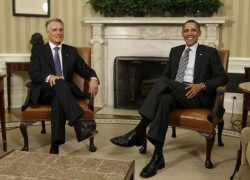 The President of Portugal Cavaco Silva paid a visit to the White House Wednesday to meet with President Barak Obama. President Obama reciprocated the warm hospitality that he received during his visit to Lisbon in November 2010, when he attended NATO’s summit in Lisbon, the White House said.

According to the administration agenda for the meeting, the two presidents addressed preparations for the 2012 NATO Summit that the U.S. will host in Chicago, the revitalized U.S.-Portugal Bilateral Commission, enhancement of bilateral economic and commercial relations, cooperation in education, science and technology, the promotion of democracy, good governance and human rights around the world, and U.S. support for Portugal’s implementation of its IMF-EU reform program.

After the meeting the White House issued the following joint statement

Building on the deep friendship and long-standing alliance between the United States and Portugal, we met today to reaffirm the strength of the partnership between our two countries. We acknowledged the very important role played by the Portuguese-American community in bringing our two nations closer together. Determined to further enhance our relationship, we discussed ways of maximizing the work of the U.S.- Portugal Bilateral Commission, which facilitates cooperation in areas as diverse as defense and security, education, science and technology exchanges, economic revitalization, law enforcement, and development in the Azores.

We also noted that in recent years, partnerships between Portuguese and American universities are developing state of the art research in areas such as engineering, information technology, and medicine, and we committed to fostering these relationships in the future.

This meeting was an opportunity for exchanging views on the present world economic and financial situation. The United States underscored its full support for Portugal’s implementation of its reform program backed by the IMF and the EU.

We also agreed to continue our close cooperation within the U.N. Security Council, where Portugal currently serves as Council President, on issues of mutual concern, such as Syria, Libya, Middle East peace, and Iran. We emphasized the importance that both our countries attach to the role of the United Nations in the promotion of peace, democracy, good governance and human rights.

As two of the original founding members of NATO, we reaffirmed our commitment to the Atlantic Alliance. We discussed ongoing NATO operations, in particular in Afghanistan, where Portugal intends to maintain its contribution. Recalling the success of the 2010 NATO Summit in Lisbon, we reviewed plans for the May 2012 NATO Summit that President Obama will host in Chicago.

We agreed that we would work together in the coming months to ensure that the Summit advances our joint goal of ensuring that the Alliance is fully prepared to meet the security challenges of the 21st century.

On a separate statement to the press, outside the White House, President Cavaco Silva said Wednesday he is confident Greece will “overcome” its difficulties and that the successful implementation of Portugal’s financial bailout program is essential for Eurozone stability and that the euro will survive. He also added that the European integration has been a great success, “I am convinced that at the end of the crisis we shall have a stronger European Union and the euro will be a strong world currency” he said.

The President of Portugal is visiting the United States, from November 9 through November 15, with stops in New York, Newark, Washington and California.