John Kerry: ‘On the Occasion of Portugal Day’ – Washington, DC 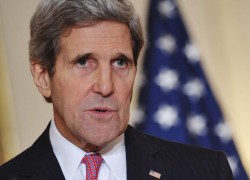 Joining the Day of Portugal celebrations, on behalf of President Obama, the Secretary of State John Kerry released a statement to the press congratulating the people of Portugal on the occasion of June 10, Portugal National Day.

ON THE OCCASION OF PORTUGAL DAY

On behalf of President Obama and the people of the United States, I congratulate the Portuguese people as you celebrate Portugal Day on June 10.

Since the founding of the United States over two centuries ago, Portugal has been an important partner and ally. The relationship between our two countries, which spans the range of cultural, economic, and security ties, has strengthened the Atlantic community. Our two nations share a commitment to human rights, liberty, and democracy.

Portugal plays an important role in global affairs and international security through its commitments to NATO, the United Nations, and other multilateral organizations. The United States is proud to work with Portugal to defend freedom throughout the world. I enjoyed meeting with Foreign Minister Machete in April and look forward to continuing our work on important global issues in the year to come.

I wish the Portuguese people joy and continued success this Portugal Day as you celebrate your rich culture, history, and the life and work of Luís de Camões.

Source: U.S. Department of State
————————
The Day of Portugal is a national holiday celebrated by the Portuguese nation every year on June 10. The date also celebrates the life of Luis de Camões, Portugal’s national poet who died on the 10th of June 1580. Camões wrote “Os Lusiadas,” Portugal’s national epic poem celebrating 16th century Portuguese history and achievements. For the Portuguese people living abroad, the Day of Portugal is also the time to celebrate their heritage and ethnic pride.