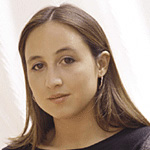 Portuguese conductor Joana Carneiro,  a 34 year old Lisboan, is on her second season (2010-2011) at the Berkeley Symphony  Orchestra where she is conductor and music director.

This season’s schedule includes a re-engagement with the Saint Paul Chamber Orchestra with Dawn Upshaw as soloist, a debut with Indianapolis Symphony, and a return to Sao Paulo where she will conduct the complete Daphnis & Chloe.

Last season, she led a much-lauded opening concert of the Venice Biennale in the Gran Teatro de la Fenice and made debuts with the Sao Paulo State Symphony, Ensemble Orchestral de Paris, and Saint Paul Chamber Orchestra, where the Pioneer Press called her performance “an unqualified triumph.”