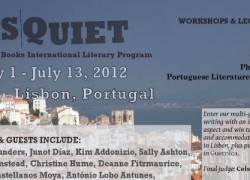 Now, Disquiet is returning for a second year of adventure with dynamic workshops in fiction, non-fiction, and poetry, along with weekend field trips and literary walking tours in Lisbon.

During the summer of 2012, guest writers and faculty will include Junot Diaz, Denise Duhamel (author of Queen for a Day poetry collection), Richard Zenith, Kim Addonizio (her books include Lucifer at the Starlite, Tell Me and The Philosopher’s Club), Frank X. Gaspar (his novel, Leaving Pico, is a coming-of-age in the Portuguese community of Provincetown), Philip Graham, Christine Hume (Banard Women Poets Prize), Josip Novakovich, Luísa Costa Gomes, Valter Hugo Mãe, Jacinto Lucas Pires, and Rui Zink (author of Hotel Lusitano, Apocalypse Nau and The Substitute).

In addition to writing workshops, the ILP is expanding its offering to include courses in Songwriting, Photo-Documentary Storytelling (with Pulitzer-Prize winning Photojournalist Deanne Fitzmaurice) and Book Arts (with Portland’s Independent Publishing Center).

Jeff Parker is the director and co-founder of Disquiet. Previously, he was the program director of the Summer Literary Seminars in St. Petersburg, Russia. He is author of the novel Ovenman, the story collection The Taste of Penny (Dzanc Books) and the forthcoming nonfiction book Igor in Crisis: A Russian Journal from Harper Collins. Currently he is the Director of an MFA in Creative Writing at the University of Tampa, Florida.

In this interview for the Portuguese American Journal, Jeff Parker answers questions about Disquiet, tattoos, Portuguese literature and the arts scene in Lisbon. 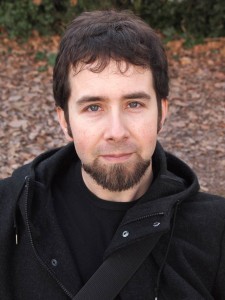 Why did you decide to put on Disquiet? Who came up with the idea?

Portugal is a place that’s sort of off the radar, literarily and otherwise. I had this idea that a good place for a literary program has these elements: a strong literary and cultural tradition, a thriving young literary scene, and is reasonable priced by Western standards. There you have a nice mix of practical and artistic. But Portugal, Lisbon, adds so much to that. It’s a strange, alluring place, with bright sides and dark sides. It’s got centuries old castles and world-class beaches. It’s the kind of place you’d want to have a vacation and the kind of place that can teach you a lot. It’s a lot of fun. You know a program like this is sort of like recreating Paris in the 20s in microcosm. We take a group of writers–in this case 50 of them–and plop them as expats into strange and underexplored environs. The only difference is we facilitate engagement with Portugal’s literary culture. In other words, we hang out and drink with and talk to writers working in a totally different literary/political climate, writing totally different kinds of things, for totally different kinds of reasons.

So that was my idea. Dzanc Books has asked me to start an intl. program for them–but you can’t do something like this on your own. I met Scott Laughlin (co-director of Disquiet) in Russia years ago and he had connections there to Alberto de Lacerda (award winning Portuguese Author) and had been there a few times. Oona Patrick who is Portuguese-American, who I met several years ago totally by chance, helped me connect lots of dots, putting me in touch with Frank Gaspar among others. It all just fell into place that way.

What did you hope to accomplish? What do you feel you did accomplish?

We hoped to do a number of things: to make a bunch of American and Canadian writers into foreigners because becoming a foreigner, as Proust said, is essentially the same thing as becoming a writer; to raise the awareness of Portuguese literature and cultural among North Americans; to have a great time in one of the most striking, odd, beautiful and memorable cities in the world…among many other things. Essentially the idea is to create an experience that you could never otherwise experience in a city that you might never otherwise go to. No one could travel to Lisbon without our program and meet 20 different Portuguese writers in the way that we met them.

What elements of the conference worked? What didn’t?

It went over better than we could have ever imagined. The Center for National Culture (CNC), our primary partner in Lisbon, is one of the most efficient cultural institutions in the world. They made all the logistics work. What didn’t work? Well, you know, the typical things: some rooms weren’t comfortable or air conditioned enough for the Americans. But we all made it, and everyone, with the exception of two people out of 50, according to the evaluation, loved it.

How did you select the readers and panelists?

From the North American side, we selected writers who have reputations as great teachers. From the Portuguese side we worked with our partner, the CNC, who has a very large roster of Portuguese writers as members.

Why is Portuguese literature such a dark horse? And so unknown to global readers?

I very much like José Luis Peixoto and Valter Hugo Mãe and Patricia Reis among many others. José Agualusa is terrific and well translated. António Lobo Antunes obviously is one of the great living world writers. As for writers from North America of Luso descent, I like Frank Gaspar and Katherine Vaz and Anthony De Sá. I met a whole new group of young Portuguese-American writers in Lisbon this summer, who I hope I’ll be reading soon.

You gathered quite possibly the largest gathering ever of Luso writers in one place. Can you foresee a journal or an anthology coming out of this event?

I don’t know. That’s probably for other people to decide. I’d like to work on an anthology of contemporary Portuguese writers in English translation.

As director, which activities did you feel were most significant?

How long did it take you to organize Disquiet?

Well, we were talking about it for a couple years. A coherent plan had to be put in motion and then Scott and I traveled to Lisbon in June of 2010 for ten days to have meetings and really start working. There were many times in between there that we thought it would never work. But it did.

How many participants were there? And what was the diversity? There were participants from Brazil and Angola, for example, and many from Canada.

What might future participants hope to accomplish at Disquiet? What benefits does it offer?

There are lots of literary programs. And there are lots of literary programs in foreign countries. What’s maybe unique about us is that we organize an experience that’s fully engaged with the literary, artistic, and cultural world we’re a part of. Our participants are constantly hanging out with and meeting Portuguese writers and scholars and artists and going to the places that they go.

What are you most proud of?

What was the most touching moment?

When Melissa Da Silveira Serpa (Disquiet participant) had the swallows (a symbol of good luck to Portuguese fishermen) tattooed on her arms.

Why are study abroad programs (like Disquiet) invaluable to a writer’s development?

The world is global now. To know anything you have to have a sense for yourself outside yourself. You have to have a sense for others. You can travel on your own and you should. But a program like this just gives you a chance to look at the thing you want to do from another perspective. We writers in America bitch and moan a lot but we have it pretty good. At the very least, having a few Super Bocks with Jacinto Lucas Pires is something I would recommend to anyone.

Millicent Borges Accardi is a contributor to the Portuguese American Journal. She is a Portuguese-American poet, the author of three books: Injuring Eternity (World Nouveau), Woman on a Shaky Bridge (Finishing Line Press chapbook), and Only More So (forthcoming from Salmon Press, Ireland). She has won fellowships from the NEA, the California Arts Council, the Barbara Deming Foundation, and Canto Mundo. Last fall, she was a visiting poet at The Muse Writers Center in Norfolk, VA. Millicent lives in Topanga, CA, and was in attendance at Disquiet 2011.

What people are saying about Disquiet

“Thank you, to the entire DISQUIET team for giving me the experience of a lifetime. I truly feel blessed to have been included in such a wonderful program, and I felt that I left with more then I anticipated. The program was well organized, and, most notably, the team behind it all made it easier for a young solo traveler such as myself to feel welcome… Thank you thank you thank you for a time in my life that will remain magical forever.” — Marisol Benter (writer from San Diego, CA)

“I liked that there was always something going on–I felt no pressure to try to attend everything because that would have been nearly impossible. Instead, we had the freedom to build our days around speakers and panels we particularly wanted to attend and were able to structure the rest of the day around our own activities and interests as they occurred to us. Disquiet was, sincerely, one of the best experiences I have ever had.” — Katie Buoymaster (student at Williams College)

“The quality of the people who organized, participated, and contributed to this program was magnified by their kindness. I’ve learned so much about the writing life and will be applying this new knowledge towards changing my life to accomplish the writing goals that I’ve set out. I cannot express how thankful I am for this program. Very well done.” — Tony Roma (Playwright from San Francisco)

“Excellent workshops, literary excursions, film screenings, meeting writers from all around the world, and all packaged in an inviting city—what more could I ask for? Overall, an incredible experience that will continue to feed my work in the years to come.” – Carlos Queirós (fiction writer and graduate student at the Iowa Writers Workshop)

“I am most impressed by the way program participants seemed diverse, kind, and easy to be around. But I was also blown away by the degree of preparation and welcome put into our program experience.” –Aisha Sloan (author of Resolution in Bearing, lyric essays about race, place and art, forthcoming from Iowa Press.)

“The best organized workshop I have attended. And many of the workshops consisted of participants who could have well been workshop facilitators due to education, teaching experience, and literary credits. I found it difficult to refer to many as ‘students.” — Lara Gularte (Poet from Magalia, California)

“This whole experience was almost too good – it’s being nearly impossible to readjust to regular life! I particularly loved how we were welcomed into what seemed like privileged circles, how we were engaged by both the academic literary establishment as well as marvelous Portuguese writers.” — Caitlin Myer (organizer of Litquake in San Francisco)