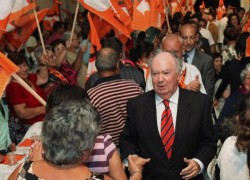 Alberto João Jardim, 68, won reelection, Sunday, for a 10th term as President of Regional Government of Madeira, with an absolute majority of 48,56%.

Jardim has ruled Madeira for the last 33 years, since 1978, as Madeira’s first and only elected regional leader, since the Region won autonomy from Portugal in 1976.

He campaigned against the accusation of having mishandled Madeira’s debt now estimated at 5 million-euros (6.7 USD billion).

Moody’s ratings agency had downgraded Madeira’s credit rating, on the heat of the electoral campaign, after the Regional Government failed to report more than 1 billion-euros ($1.35 USD billion) in hidden debts.

In spite of Moody’s move and the opposition accusations, it was anticipated that the issue of the Region’s hidden debt would not harm Jardim’s populist image and his public support.

Jardim was also challenged by a fierce opposition that protested against his total disrespect for the rules of democracy, for his contempt for his political adversaries and his tampering with the election process, enabling those in power in Madeira to act with absence of civility, ethics and responsibility.

Madeira (population 253,000) became an autonomous region of Portugal in 1976 with its own government and autonomous legislature. The Regional Government includes the Legislative Assembly composed of 47 deputies, elected by universal suffrage for a four-year term; the Regional Government and Presidency, with parliamentary legitimacy, composed of a President, a Vice-President and seven Regional Secretaries, responsible for day-to-day executive operations.

The Autonomous Region of Madeira, composed of Madeira and Porto Santo islands, is represented in the Council of Ministers of the Central Government by a representative appointed by the President of Portugal.