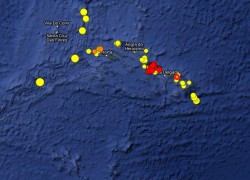 The Center for Seismic-Volcanic Surveillance of the Azores (CVISA) has recorded today, January 19, two seismic events of moderate intensity on the São Miguel island.

The first seismic event, magnitude 4, 1, on the Richter scale, epicenter located at 29 miles west/norwest of Mosteiros, was felt at 08:45 local time, in the Ponta Delgada district.

The second seismic event, magnitude 2, 8, on the Richter scale, epicenter 7 miles southwest off Água Retorta, was recorded at 11:31 local time.

The last major volcanic eruption was in 1958 in Capelinhos, Faial island, destroying 300 houses and causing the evacuation of 2,000 people. Earthquake occurrences are common in the Azores, for the most part registered at sea and not felt by the population.

Follow the seismic activity in the Azores in real time here.