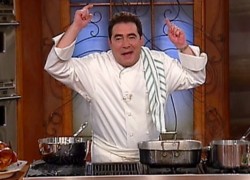 The James Beard Foundation is honoring Portuguese American Chef Emeril Lagasse, at the 2011 Chef’s & Champagne event, for his contributions to the world of food and for his dedication to educational programs. The event is scheduled for July 23, 2011 at the Wölffer Estate Vineyard, Sagaponack, Long Island, NY.

In 1991, the James Beard Foundation named Emeril Lagasse the Best Southeast Regional Chef after he opened his first restaurant in 1990, in New Orleans, Emeril’s, to huge success. In 2002, Emeril started the Emeril Lagasse Foundation, a charity organization whose mission is to improve the lives of young people.

Chef Emeril Lagasse has hosted over 2,000 shows on Food Network, and has been the food correspondent for ABC’s Good Morning America for over 13 years. His show “Fresh Food Fast” launched in July 2010, and” Emeril Live” (formerly on Food Network), can currently be seen on Cooking Channel. He also hosts the series “Emeril Green” and “Cooking with Emeril” twice weekly on Martha Stewart Living Radio on SIRIUS XM.

Chef Emeril Lagasse is the chef and proprietor of 12 restaurants including three in New Orleans, four in Las Vegas, two in Orlando, one in Miami, and one in Pennsylvania. He is also the best-selling author of 15 cookbooks. His most recent book “Farm to Fork: Cooking Local, Cooking Fresh.” Authentic Entertainment, Inc. is the producer of “The Originals with Emeril.”

Emeril Lagasse was born October 15, 1959, in Fall River, Massachusetts, where he was raised by his French-Canadian father, Emeril Jr., and his Portuguese mother Hilda. Emeril got his start in the food industry making bread and pastries at a Portuguese bakery in Fall River, Massachusetts. After high school, Emeril turned down a full scholarship to the New England Conservatory of Music to pursue his true passion, cooking. He attended Johnson and Wales University in Rhode Island where he received his degree in culinary arts. Later in his career he would receive honorary doctorate degrees from both Johnson & Wales University and the University of Massachusetts Dartmouth.

Chefs & Champagne® New York is the James Beard Foundation’s annual summer tasting party. It features flowing Champagne, the wines of Wölffer Estate Vineyard, Stella Artois beers, and culinary offerings from a select group of more than 30 fine chefs, many from JBF Award–winning restaurants. The 2011 recipient of the Christian Wölffer Scholarship for wine and food studies will be announced at the July 23 event.