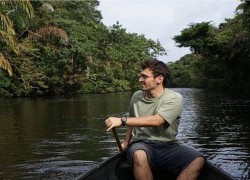 Conservation biologist Diogo Veríssimo is the winner of the IUCN – Thomson Reuters Environmental Media Award for 2012.

The award is sponsored the International Union for Conservation of Nature (IUCN) in partnership with the Thomson Reuters Foundation to honor environmental journalism across the globe.

For the first time, the search was conducted via Facebook which received a total of 26,274 votes regarding 162 entries from 48 countries. Veríssimo’s submission, titled “Greening the crisis: turning trouble into opportunity,” won 5,352 votes.

Participants were asked to submit a 450-word maximum article online, then get their friends and colleagues to vote for them. Articles focused on an environmental issue relating nature to human well-being.

Born in Lisbon, Portugal, Veríssimo a biology degree form thewas a graduate student from the University of Lisbon. Dedicated to biodiversity studies, he is currently a doctoral candidate at the Durrell Institute of Conservation and Ecology at the University of Kent (UK).

Established in 1998 by Thomson Reuters Foundation and IUCN, the Award aims to raise global awareness of environmental and sustainable development issues by encouraging high standards in environmental reporting worldwide.

As the winner, Diogo Veríssimo is invited to travel to South Korea to attend the IUCN World Conservation Congress on Jeju Island  in September 6-5 2012.