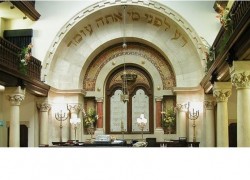 Portuguese Under-Secretary of Tourism, Adolfo Mesquita Nunes, announced in Tell Aviv, Israel, that Portugal is granting citizenship to descendants of Sephardic Jews who were expelled from the country five centuries ago.

The announcement follows a recent amendment to Portugal’s “Law on Nationality” that allows descendants of Jews who were expelled in the Portuguese Inquisition to become citizens if they “belong to a Sephardic community of Portuguese origin with ties to Portugal.”

The motion, which was submitted by the Socialist and Center Right parties, was approved unanimously on Friday 12 April 2013 as an amendment to Portugal’s “Law on Nationality.”

A similar bill was approved by the Spanish legislature last year after Spanish Justice Minister, Alberto Ruiz-Gallardon, submitted a motion to grant citizenship to any Sephardic Jewish person who could prove Spanish identity or “special connection” to Spain.

“In the near future it will also be possible in Portugal” for Jews to apply for the citizenship, the country’s Tourism Minister who was in Israel last week on a state mission. He also said that Portugal wants to preserve its Jewish heritage.

“The next step is the creation of a bureaucratic framework for reviewing applications, which will probably involve the Jewish community of Lisbon and government officials,” said José Carp, the leader of the Jewish community in Portugal,who has lobbied for several years for the amendment.

Applicants must be able to show “Sephardic names.” Another factor is “the language spoken at home,” a reference which applies to Ladino. The amendment also says applicants need not reside in Portugal, an exception to the requirement of six years of consecutive residency in Portugal for any applicant for citizenship.

It is believed that the first Jews settled in the Iberian Peninsula at the time of Nabucodonosor, King of the Chaleans (6th century) or even before, at the time of Solomon who reigned in Israel from 974B.C. to 937B.C.

In the 12th century, when the kingdom of Portugal was formed, there were already a number of important Jewish communities in the territory.  Yet, many Sephardic Jews expelled from Portugal in 1497 were actually Jews who had been expelled from neighboring Spain in 1492 and had found temporary refuge in Portugal.

In 1497, when King Manuel I of Portugal decreed that all Jews had to convert to Christianity or leave the country, hard times followed for the Portuguese Jews, with deportation, exile, persecution and death. As of the present time, Jews are welcome in Portugal where nearly five thousand Jews enjoy a peaceful life.