Isabel Pessôa-Lopes by foot around Portugal in 80 days – People 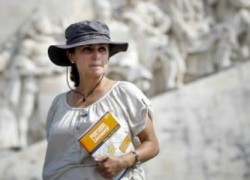 Many Portuguese explorers have made a name for themselves by venturing into the unknown to discover new worlds, but Isabel Pessôa-Lopes, 44, did what others have never done before. She travelled around Portugal, by foot, for 80 days, to discover, she said, that half of her own country is “a waste land.”

With no sponsors and no fanfare, Isabel walked alone, for over 2000km, from one border to the other border, by the sea and over land, to meet her own people and discover herself.

She started her journey on July 4, 2011, departing from the Padrão dos Descobrimentos monument, in Belem, Lisbon, to fulfill her childhood fantasy of walking from one custom house to the next one, returning 80 days later to the point of departure with many stories to tell.

Crisscrossing the country side, she slept on light houses, firehouses, town halls, inns and private homes. She was met with curiosity by bystanders, some of them taking her for a lost pilgrim on the way to Fatima shrine.

She told reporters, “People had the most interesting reactions upon my arrival at their villages. Once I was told, ‘are you aware this is not the way to Fatima?’” Another time, she had to climb up a tree and stay there for one hour and a half to escape a raging bull.

Now that she has fulfilled her lifelong wish, Isabel may very well be the only Portuguese explorer that can claim to have known Portugal North to South, East and West and all around.

Born in Lisbon in 1967, Isabel Pessôa-Lopes holds a degree in Space Science from the International Space University (France). She has worked as a consultant in space risks, in London, UK, since 1991.  A researcher and lecturer, she has also worked in France, Germany, Czechoslovakia and Japan.