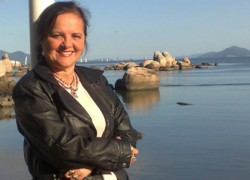 In Lélia Pereira’s home in Florianapólis, Brazil sits an un-opened bottle of Licor do Ezekiel, the passion fruit distilled in the Azores and sometimes sold in figurines of Azorean folk characters. This particular bottle dates from her first trip to the island of São Miguel in 1988 and a visit to the liquor fábrica where Pereira heard the old woman reciting the nursery rhyme. Along with the aging, sweet liquor distinctive of the islands is an essence that reveals this Brazilian woman’s profound attachment to the Azores.

…an old woman dressed in black was sitting
on the stones in the entry of the fábrica, holding a child and reciting a nursery finger-rhyme…

she reminded me of my grandmother…

She is a writer, cultural activist, former public administrator, and retired sociology professor from the State University in Santa Catarina. Her contributions as an international figure commenting on and promoting links between Azorean influenced culture in Southern Brazil and Portugal’s 9-island archipelago in the Atlantic Ocean are significant and multi-faceted. Why is Pereira, born and raised thousands of miles from the Azores, so attached to an insular archipelago culture and dedicated to its heritage? The woman ‘At The Corner of The Islands’ (the title of her fascinating 2011 collection of chronicles, Na Esquina Das Ilhas) responds to such questions by evoking geography, history, poetry, and a characteristically Luso blend of mystery and emotion. 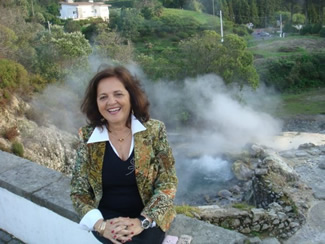 Foremost, she says it is an Espaço Telurico, a telluric space, which connects her, referring to the lava rock that constitutes the Azorean archipelago. “It comes from the earth of a particular place and flows in the blood, deeper than our consciousness and exists wherever Azoreans have immigrated.” This is the essence of memory and connection for her, the baggage of heritage carried deep in the subconscious. While keeping the aging elixir sealed in the bottle of Ezikiel, she narrates her own path of cultural discovery in a Brazilian voice filled with music and anecdotes.

In Pereira’s case, it required a series of triggers to set-off a wave of recognition and passionate investigation, such as the old woman reciting a nursery rhyme, one she had heard herself as a child without knowing its origins. For nearly three decades she has dedicated formidable energies to Southern Brazil’s Azorean heritage through research, publication, and cultural engagement.

My work involves what we carry with us as Azorean descendants in Santa Catarina…
Only with knowledge can we connect with the past.
What did immigrants carry with them and what do we inherit?

When Lélia Pereira was growing up in Tubarão in the southern state of Santa Catarina, little importance was given to the history of mid-18th century Azorean immigration to Brazil. In her mother and grandmother’s home, the term ilheus (islanders) was used to refer to their origins, meaning immigrants from the Azores, but little was made of linking regional folk traditions to the Azorean archipelago. She first became aware of the importance while studying in Rio Grande do Sul. Later, while teaching at the Santa Catarina State University, a class was created dedicated to local history as well as a bibliography of references. It was then that she realized her family history was intimately related to the first group of Azorean immigrants to the region in 1748.

In 1990, following her first visit to the Azores, Pereira started writing about these links at the Institute of History and Geography in Florianopolis. When she mentioned that she was a 10th generation Azorean to Onésimo Almeida, the well-known American academic and writer responded, “You are well preserved for a 10th generation Azorean!” Over nearly three decades of research and commentary, Lélia Pereira’s has honed her perspectives “At The Corner of the Islands”, her figurative place of observation connecting Santa Catarina Island and the Azorean archipelago.

“When I heard that old woman at the fábrica reciting those words to the child, I was struck by the evidence of my origins…. without anyone ever explaining it to me… I was the child in that woman’s arms and I understood profoundly that those simple words had been carried over time and space…”

Lélia Pereira in the Azores.

Emerging as if by enchantment, heritage is affirmed in an old woman sitting on stones outside a liquor fábrica. Insular cultures with deep oral traditions provide a wealth of material to explore via folklore. Ironically, insularity preserves identification even as its diaspora scatters throughout the world. Lélia Pereira examines this rich zone, particularly in the work of writers and visual artists from both Brazil and the Azores.

Açorianidade, (Azoreaness)….is that poetic and political definition of ethnic identity that is impossible to prove in a laboratory but palpable in the corners of the heart and in memory. For nearly a hundred years, the concept has served as the cornerstone for examining and building an awareness of what it means to be Azorean. Vitorino Nemésio, the Azorean writer and intellectual who coined the term in 1932 never visited Brazil’s Santa Catarina region. However, he was fascinated by Brazilian culture, and acknowledged the significant Azorean contribution to Southern Brazil, as Pereira indicates in one of her chronicles.

If an ethnic litmus test could unmistakably identify the essence of the Azorean soul, what would be the basis of its definition? If one could look within, rather than at exterior surfaces, to discover what joins these people what would be visible? Lélia Pereira explains ethnic identification by geological/geographical attachment, history, and such folk heritage as a child’s nursery rhyme. Still, it is stunning to observe the immediate and deep attachments that continue to unite all these scattered Azoreans. Saudade, the over-used reference to Luso-nostalgia, is insufficient explanation for defining the complex characteristics of the Portuguese soul.

In the case of Azorean influence on the culture of Southern Brazil, one wonders if there is a shared wound or womb, beyond insularity and 18th century geopolitical maneuvering, that has created such enduring collective imagination. What is it about humans that cause them to always search for their own reflection or a similarity in the image of the other no matter where they wander? To identify the ‘us’ in the ‘me’? Is it an invented, unconscious or cultivated impulse that reinforces a mythology rooted more concretely in time and distance?

The influence of Azorean culture is currently affirmed and omnipresent in Santa Catarina, as seen in the proliferation of folklore groups, arts and crafts, religious festivals, local cuisine, and tourist routes. These are some of the more obvious results over the last twenty years of efforts by people such as Pereira to link the cultural heritage of Southern Brazil to the Azores. The outspoken promotion of regional ethnic identity sometimes stands in stark contrast to the nearly occult manner in which traditions took root organically and existed since 1748.

Here is my life: — This sand so clear
With drawings that walk
Dedicated to the wind
Here is my voice: — This empty shell
The shadow of a sound
Preserving its own lament… (…)
Here is my heritage: — This solitary sea-
On one side it was love
And on the other forgetfulness.

“At The Corner of the Island” (Na Esquina Das Ilhas), is Pereira’s fascinating collection of 27 essays and chronicles previously published between 2004 and 2011. Divided in two sections in dialogue with one another, the book offers reflections on Santa Catarina, Brazil regrouped in ‘The Island From Here’ and commentary on the Azores in “The Islands from There”. On full display is Pereira’s conversational tone and brightly hued language as she weaves commentary on Azorean writers such as Eduíno de Jesus, Daniel de Sá and the generation including João de Melo and Urbano Bettencourt. She discusses the art of Brazilian painters Vera Sabino and Willy Zumblick and recalls the ardent light of Southern Brazilian in the poignant Águas de Março (The Waters of March). She evokes traditional festivals, the idiosyncratic beauty of the Portuguese language, the witch-lore of Santa Catarina Island, the famous folklorist Franklin Cascaes, and visits two famous seaside bars (Peter Café Sport and Bar do Arantinho) as if the customers were joking and telling stories to one another across the vast Atlantic.

Indeed, all the pieces in her work converse from island to islands in a free-flowing, poetic and accessible exchange, offering figures of Azorean connectivity. Pereira writes “At The Corner of the Islands”, but her siren’s voice is a sea of affection, flowing between islands and touching shores, Azorean and Brazilian. From these cultures steeped in oral traditions, she draws rich sources of awareness and sensation, creating for the reader an accessible literature that explores ethnic heritage. One can only hope that the work will be translated soon and distributed for an international public.

Among Pereira’s other publications it is also important to note Caminhos do Divino (Roads of the Divine), a vividly illustrated and exposé of the traditional Holy Ghost festivals throughout the State of Santa Catarina. Finally, along with Canadian academic Irene Blayer, Pereira coordinates the dynamic culture Blog, RTP Comunidades.

“I could spend the rest of my life as well in the Azores as in Santa Catarina,” Lélia Pereira says, “…but there is so much to do before then.” Currently, she travels regularly in the triangular route that includes continental Portugal, the Azores, and Brazil, writing, researching, and participating in international conferences. Her list of future projects is extensive, her desk piled with correspondence, books, and notes for works in progress. The windows of her 9th floor apartment in Florianópolis offer a view of the bay, that passage to the Atlantic from where the first group of Azorean immigrants arrived in Brazil in 1748. And the licor do Ezekiel? For now, the bottle remains corked, but its essence flows abundantly and perhaps that is the secret of its magic “At The Corner of the Islands.”