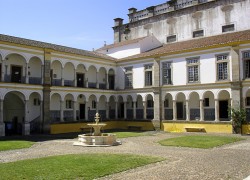 The University of Évora, mainland Portugal, is organizing the International Conference on Language and Linguistics to be held on October 10-12, 2011.

The conference is dedicated to promoting the sharing of research and experiences in the field of linguistics and education.

Call for papers include topics such as Portuguese as a Foreign Language; Portuguese Linguistics; and General Linguistics. Abstracts should be between 200-300 words in doc or .docx format. The contact person is Maria Marçalo at CILL2011EVORA@gmail.com. Deadline for submission is July 25, 2011. Notification of acceptance is September 5, 2011

The University of Évora, specially oriented toward the education of human resources, is the second oldest Portuguese university founded in 1559, after the University of Coimbra established in 1290. Closed in the 18th century, the university reopened in 1979.

The University is recognized internationally, being regularly evaluated by the European University Association (EUA). It has also been accepted as a member of the Magna Charta Universitatum. The University of Évora has around 5,760 students enrolled in graduate courses, 1,588 in Master’s courses and 277 in PhD courses. It has a teaching staff of 577, and an administrative staff of 406.

Évora, a city with a population of nearly 41,159, is located in the Southern province of Alentejo at about 130 km from Lisbon. Évora, which holds remains of Roman architecture, is listed as a UNESCO’s World Heritage city.