In the clear: Leonor Antunes opens installation at the New Museum – NYC, NY 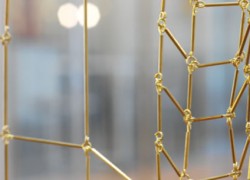 As matter refined by human thought and shaped by the hand, materials carry meanings, histories, metaphors, and various units of social measurement. Leonor Antunes’ current installation at the Lobby Gallery of the New Museum of Contemporary Art — I stand like a mirror before you — invites us to consider spatial and social interplay among materials. Lisbon-born and Berlin-based, Antunes placed some of the dominant materials of Portuguese industry on display: cork, plastics (molds), rubber, leather, technology (cables). Arranged as formal elements, each of these forms are meticulously executed, while sparing the viewer all the constraint required in its making. Continuing in the tradition of minimalist sculpture, movement is prioritized, for it is through movement of the body and eye that the installation makes itself known as a full-body experience.

Informed by the movement of experimental cinema (Maya Deren) and the textile work of Anni Albers (the first female designer to have a solo show at the MoMA), Antunes magnifies the ambiguities of the space’s particular orientation. Separated from the café by a clear glass wall, the Lobby Gallery is not complicated: a white rectangle with high ceilings. A large skylight endows the space with a quality of light that literally keeps us reaching upward. With an installation of mostly vertical pieces Antunes amplifies the fullness of the space, while creating multiple encounters for engagement. Random Intersection #16, a work of braided leather was much fun to contemplate, as was a secluded and pleasant land in this land I wish to dwell, 2014 a work previously shown in Miami. Although several of these materials might be associated with entanglement, Antunes arranges rope, cables, and mesh with a sense of order stemming not from over-determination or compulsion, but from the reward of skill and its earned clarity. 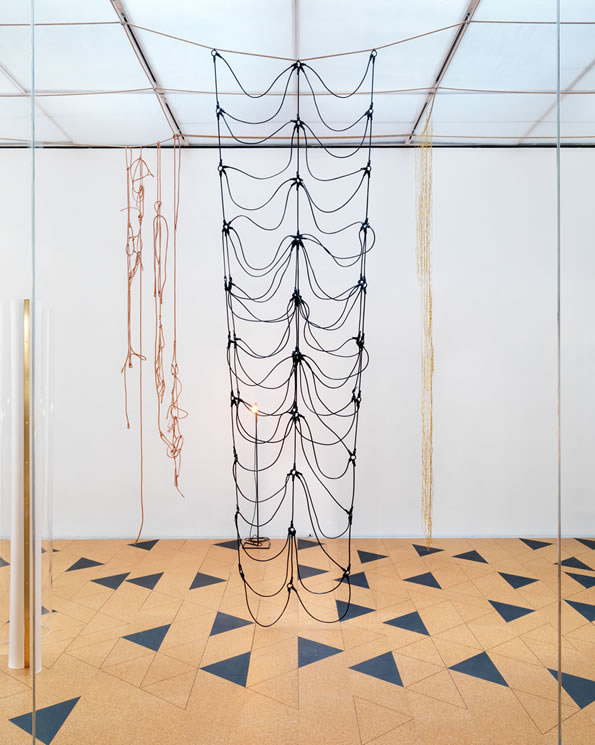 Installation view, Leonor Antunes, “I Stand Like A Mirror Before You”, 2015. New Museum of Contemporary Art. Photograph by Maris Hutchinson, courtesy of the New Museum.

I don’t think any architectural element of this space went unexamined by Antunes. Each vertical sculpture is suspended from the ceiling lights by a clean matrix of white knots. Flawless wall-to-wall floor patterns reference Anni Albers’s triangles, but Antunes’ floor piece was made of natural and black cork, covered in linoleum. Cork is not a reflective texture, but the soft sheen of linoleum keeps light from being absorbed deep into its mealy mass. As a result, light isn’t trapped and the eyes are inevitably drawn to the smaller luminosities: lines of beauty that don’t lose momentum.

Throughout this post-industrial age of hyper-production and factory-style shaping, certain languages of making evaporate from our sociocultural landscape. The folds and strokes of regional knots as applied to fishing nets, for example. Maritime and equestrian knotwork are practically untaught, except among those who can afford to learn them for leisure and play, rather than for earning a living. With mesh and rope pieces, Antunes activates these lost languages of Portuguese knot work, without requiring American audiences to know that particular history in order to enjoy the installation. With a rigorous awareness of the history of design objects, I stand like a mirror before you guides viewers to effortlessly move, look and feel. We need more works such as these, in which the components of arrangement engage with the languages of making we lose when our cultural output becomes so dependent on digital methods. 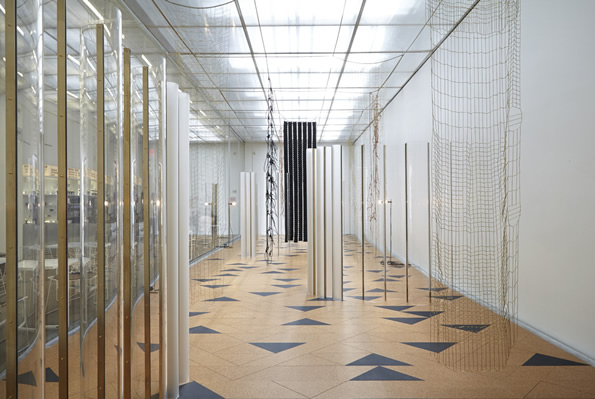 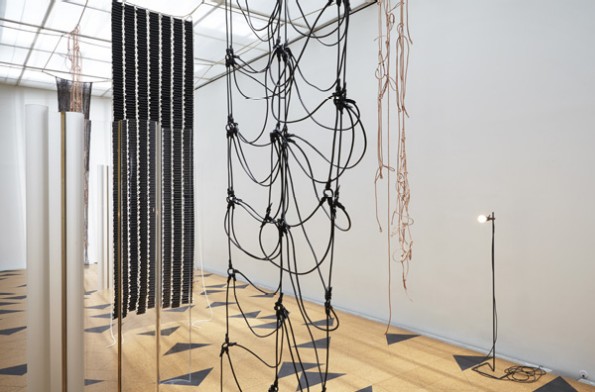 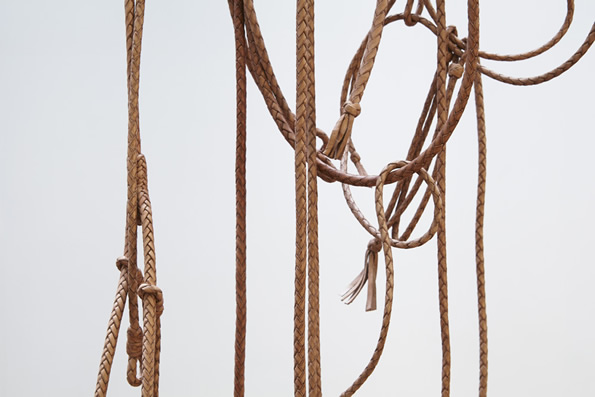 Detail view, Leonor Antunes, “I Stand Like A Mirror Before You”, 2015. New Museum of Contemporary Art. Photograph by Benoit Pailley, courtesy of the New Museum. 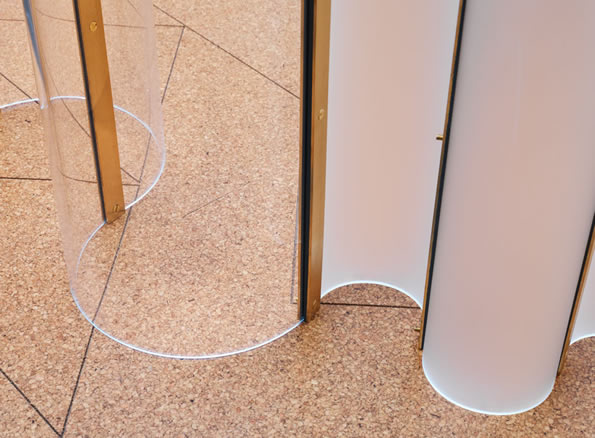 Detail view, Leonor Antunes, “I Stand Like A Mirror Before You”, 2015. New Museum of Contemporary Art. Photograph by Maris Hutchinson, courtesy of the New Museum.

Patricia Silva is a Lisbon born Arts Writer and Arts Worker living in New York City. Patricia curated the first Brazilian-Portuguese Pop-Up Cultural Festival’s art show in 2011; curated “Good Delivery” at Dixon Place in 2012; has written about contemporary art for Daylight, Velvetpark Media; guest blogged for the International Center of Photography; and has presented on the influence of bi-culturalism and the creative process at the University of Berkeley, California; the University of Macau, China; and Victoria University, Canada. Most recently published in Memories Can’t Wait, 2013.