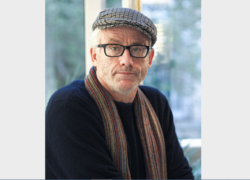 It is with great sadness that Center for Portuguese Studies and Culture|Tagus Press, at the University of Massachusetts Dartmouth, announced the passing of Dr. Chris E. Larkosh, an esteemed staff member and colleague.

Dr. Larkosh  taught graduate and undergraduate seminars in Lusophone literatures and cultures, Portuguese language, Portuguese-English translation, literary theory and cultural analysis as a Full Professor in the Department of Portuguese at the University of Massachusetts Dartmouth.

Those who would like the opportunity to express condolences to the family, please follow the link to sign the guestbook of the Chapman Family Funeral Home:

Christopher E. Larkosh, 56, of E. Providence and born in Oak Bluffs, died unexpectedly on Dec. 24, 2020 at his residence.

Chris was the son of Edward W. Larkosh and was predeceased by his mother, Dorothy A. (Lenotti) Larkosh Roberts. He is also survived by his brother, Daniel J. Larkosh.

His funeral mass will be celebrated in St. Augustine’s Church, Franklin St., in Vineyard Haven on Sat., Jan 2 at 11am and burial will be private.

Donations in his memory may be made to the World Wildlife Fund at https://support.worldwildlife.org.