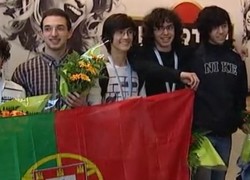 The Portuguese team won a Gold Medal (Miguel Santos), a Silver Medal (Miguel  Moreira), two Bronze Medals (Nuno Lourenço and Luís Duarte) and a Honorable Mention (Francisco Andrade). The score was the highest ever achieved by a Portuguese team at the prestigious international competition.

The International Mathematical Olympiad brings together the best and brightest students from around the world, challenging and stimulating their minds in the spirit of competition. Through a rigorous and demanding set of six questions, students demonstrate their mastery of mathematical concepts, as well as creativity in problem solving.

The International Mathematical Olympiad is the World Championship Mathematics Contest for second level students. Each country is invited to send a team of up to six students to compete in this contest.

The first IMO was held in 1959 in Romania, with 7 countries participating. It has gradually expanded to over 100 countries from 5 continents. Next year’s event will be held in Santa Marta, Colombia.