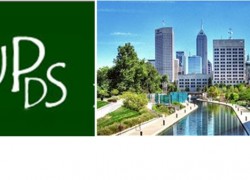 Indianapolis is home to a Sephardim community which began to be established during the first two decades of the 20th century. After being expelled from Portugal at the end of the 15th century, the Sephardim dispersed through the Ottoman Empire (modern-day Turkey, Greece, Southwest Asia, North Africa and the Balkans). Eventually they also ventured into the Americas.

According to local historical sources, the first Sephardic settlers in Indianapolis arrived from Monastir, Yugoslavia in 1906. They were followed by others in a process of chain migration, leading to the establishment of a recognizable community between 1911 and 1913. From 1914 to 1918, they were joined by fellow Sephardim from Salonika, Greece.  Within their community, the Indianapolis Sephardim spoke Ladino, the language associated with Iberian Jews.

The new community soon created its own congregation, which would later be given the name of Etz Chaim Sephardic Congregation. One of its recent Rabbis has been an instructor at Touro College in New York City, an institution of higher education named after the Portuguese Touro brothers who, in the 1700’s, founded the oldest surviving Jewish Synagogue in the United States, the Touro Synagogue in Newport, RI.

Among the Exploring the Portuguese Diaspora Conference plenary speakers is Dr. Dennis Sasso, Rabbi of Congregation Beth-El Zedeck in Indianaplois. Dr. Sasso is a direct descendant of Portuguese Jews who fled to Amsterdam and then the Caribbean and Panama. In the audience, there will be members of the Etz Chaim Sephardic Congregation of Indianapolis, some of whom are direct descendants of Portuguese Jews who fled to Turkey during the Inquisition.

In addition to the plenary session entitled “Echoes of the Portuguese Jewish Diaspora,” the Conference assembles a group of international and interdisciplinary specialists from the United States, Canada, Brazil, Portugal and other European countries, Macau and other Asian countries, Cape Verde, and Australia, who will address a variety of diasporic topics ranging from literature, linguistics, creative writing, and arts to theory, history, socioeconomic and political trends, entrepreneurship, migration patterns, and transnational relations, among other topics.

The conference will also celebrate the 60-year anniversary of Portuguese emigration to Canada and will feature a musical performance by Luso-American artist, Amy Correia.

Exploring the Portuguese Diaspora in InterDISCIPLINARY and Comparative Perspectives: An International Conference takes place at Butler University, Indianapolis, IN, USA from July 25 to 27, 2013 (http://ocs.sfu.ca/pds/index.php/pdaip/2013).