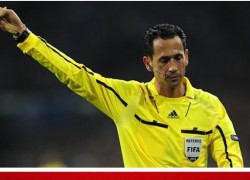 Proença, 42, officiated the 2012 Champions League Final; presiding the Chelsea-Bayern Munich Champions League final last May and was charge of the Euro 2012 final between Spain and Italy. He is on the short list for the 2014 World Cup.

A former financial advisor,  Proença took up refereeing in 1988, became a FIFA-listed referee in 2003 and an international referee in 2004.

Established in 1984, the International Federation of Football History & Statistics (IFFHS) is an organization that chronicles the history and records of football associations worldwide. Read more >>