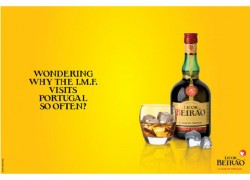 Created by Portuguese advertising agency UZINA, the campaign was designed to cheer up the Portuguese people enduring the current unpopular austerity measures which include pay cuts and tax hikes.

For the domestic audience, the ads featured former Portuguese footballer Futre as a mock candidate for prime minister. For the European audience, amusing caricatures of German chancellor Angela Merkel and French President Nicolas Sarkozy were used offering advice on how to deal with the Portuguese financial crisis.

For the world audience, the ads featured Licor Beirão next to the punch line – “Wondering why the IMF visits Portugal so often?” –  alleging to the frequent visits to Portugal of EU and IMF inspectors for bailout performance reviews.

Established in the 19th century, Licor Beirão  is a popular Portuguese liqueur produced in the town of Lousã and exported to 40 countries.

Founded in 1980, ICOM is one of the world’s largest network advertising and marketing communications agencies with 80 associates and over 2,000 clients in more than 50 countries.