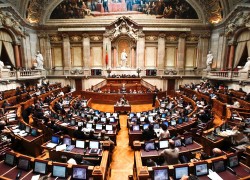 In a new decree signed Friday of last week, President Trump suspended for 90 days the entry of refugees into US territory for travelers from Iran, Iraq, Libya, Somalia, Syria and Yemen.

In reaction against the decree, Portugal’s parliament passed Friday three motions unanimously reproachful of the actions taken by President Trump.

All the motions emphasized the role of the United States into promoting “the values of tolerance and human rights, and the need to comply with the UN Charter and international law.”

Earlier this week, the Portuguese government had expressed being “very concerned” about the travel ban, adding that the “measures are illegal from a European and Portuguese point of view.”

“The Portuguese government is very concerned,” about the measures imposed by the new US administration, the Portuguese Foreign Affairs minister, Augusto Santos Silva, told the Portuguese news agency Lusa, adding that Portugal and the European Union have “a very different visa policy.”

“It is inconceivable to deny the right of entry to people who have a residency permit for the country […] In European terms it is absolutely illegal,” Minister Silva remarked.

In 2016, Portugal had offered to receive 10,000 war refugees as part of its participation in the host program of the European Union. In 2017, at the beginning of the year, “a few dozen” young unaccompanied refugees, between the ages of 8 and 18, are expected to arrive in Portugal. So far Portugal has resettled 747 refugees under the EU relocation program.

According to a recent survey, by the non-governmental International Rescue Committee, among the European countries studied, Portugal ranked at the top as one of the most wiling to welcome refugees. The survey polled approximately 12,000 people across 12 countries in Europe.

This week, the Lisbon-based Champalimaud Foundation has offered to assist scientists affected by the executive order issued by President Trump banning the entry into the United States of refugees and citizens from the seven Muslim majority countries.

Also this week, the Portuguese flag carrier, TAP Portugal, announced that passengers with passports issued by Libya, Iran, Iraq, Somalia, Sudan, Syria and Yemen, affected by President Trump’s travel ban, could be rerouted through TAP Portugal to another destination.

Last November, President Obama speaking at the United Nations, praised Portugal for renewing its commitment to refugees for the coming year.

The UN estimates that 1.19 million of the most vulnerable refugees around the world are in need of resettlement to industrialized third countries. To date, the majority of refugees resettled in Portugal are from Syria. Portugal’s population is estimated at 10.5 million.