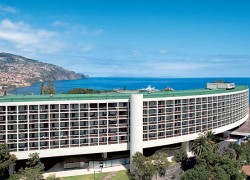 The Hotel Pestana Casino Park located in Funchal city, Madeira, was ranked 7th among the 10 top casino hotels in the world, according to ratings given by tourists and reported by hotel review sites.

The 45 year old hotel overlooking Funchal Bay was designed in 1966 by Brazilian Modernist architect Oscar Niemeyer, remaining to date the only example of Niemeyer’s architectural creations in Portugal.

Niemeyer, who is 103 years old and is still involved in diverse projects, is currently designing the new Museum of Contemporary Art in Ponta Delgada, Azores. The project will connect the Autonomous Region of the Azores with the ‘Paths Niemeyer’ worldwide.

With a total area of ​​4,000 square meters, the future museum, according to Berta Cabral, the Mayor of Ponta Delgada “is itself a work of art,” and will provide “touristic, cultural and economic” advantages to the largest city of the Azores, “which will be better known for having a work of Niemeyer,” she said.

The Casino de Madeira is part of the hotel and features 200 slot machines, card games like Poker and Blackjack and games like Roulette and Craps.

The Pestana Group, based in Funchal, Madeira, is currently the largest Portuguese tourism and leisure corporation.  Pestana Hotels & Resorts presently manages 42 hotels, spread over 3 continents: 22 properties in Portugal (10 in Madeira, 7 in the Algarve, 1 in Lisbon, 1 in Oporto, 1 in Cascais and 2 at Beloura/Sintra), 8 in Brazil (Rio de Janeiro, Angra dos Reis, São Paulo, Bahia, Natal, Curitiba and São Luis), 1 in Argentina (Buenos Aires), 3 in Mozambique (Maputo, Inhaca Island and Bazaruto Island), 1 in South Africa (at the Kruger Park), 1 in Cape Verde (Praia Town) and 1 in S.Tomé & Principe.  On the 1st of September 2003 the Pestana Group also began managing Portugal’s 43 pousadas (Pousadas de Portugal).  At present about 6,000 people work for the Pestana Group worldwide.