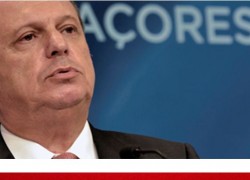 The former President of the Regional Government of the Azores, Carlos César, will be bestowed the Grã-Cruz da Ordem Militar de Cristo [Military Order of Christ] by the President of Portugal, Cavaco Silva, for his distinguished career as a public servant.

One of the oldest and highest honors bestowed by the Portuguese Government, the Grã-Cruz da Ordem Militar de Cristo is conferred in recognition for relevant public services to the country in the administration, magistrate, diplomacy, and military.

The awarding ceremony will be held in Lisbon, February 19, at Palácio de Belém, the presidential office and residence.  Former Portugal’s Attorney Geral, Pinto Monteiro, and the Former President of Portugal’s Constitutional Court, Rui Moura, will be also presented with the same honor.

President Carlos César, 56, the former leader of the Socialist Party (PS) in the Azores, was first elected President of the Regional Government of Azores in 1996. Since then, under Carlos César leadership, the socialists won the regional elections successively in 2000, 2004, 2008, and 2012.