Honored: Dennis Cardoza awarded by the Government of Portugal – California 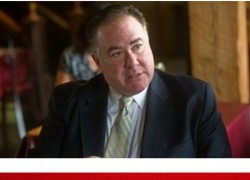 The Portuguese government has honored former Congressman Dennis Cardoza (D-CA), with the title of Grand Officer of the Order of Prince Henry, in a ceremony held in Washingotn DC, at the residence of the Ambassador of Portugal Nuno Brito.

The grandson of Portuguese immigrants from the Azores, Cardoza served for a decade in the U.S. House of Representatives.  The honor is meant to distinguish those who help expand appreciation for Portuguese culture and history.

The decision  followed a move by the California Citizens Redistricting Commissionre which left Cardoza, a consertative democrat, the choice of either retiring or challenging his longtime friend and ally, Portuguese-American Representative Jim Costa (D-CA) from Fresno.

In January 2011, working with the National Organization of Portuguese Americans (NOPA),  Dennis Cardoza and Representative  Jim Costa led the process to reinstate the Congressional Portuguese American Caucus by agreeing to be co-chairs, moving it forward and making the Caucus official in May 2011.

Cardoza, 53, has since joined the Washington lobby firm, Manatt, Phelps & Philips, as a managing director.