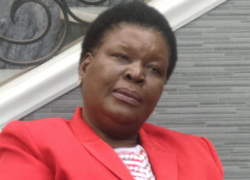 Mozambican writer, Paulina Chiziane, is the winner of the Camões Award one of the most prestigious Portuguese language writers’ accolades.

“The jury unanimously decided to award the Prize to the Mozambican writer Paulina Chiziane, highlighting her vast writing and critical reception, as well as the academic and institutional recognition of her work,” the announced reads.

The jury also referred to the relevance she gives in her books to the problems of Mozambican and African women, bringing young people closer, namely in building bridges between literature and other arts.

Paulina Chiziane is the author of “Ballada de Amor ao Vento” and “Winds of the Apocalypse”. Some of her books have been published in Portugal and Brazil, and are translated into English, German, Italian, Spanish, French, Serbian, Croatian.

Founded in 1984, the Portuguese-American Journal (PAJ) is an interactive news blog dedicated to the Portuguese-American heritage with the purpose of informing and offering an insight into the Portuguese-American experience.
All issues, printed and digital, are archived in the Library of Congress @https://www.loc.gov/item/94648842/
The Portuguese American Journal is ranked by GoogleNews.
PAJ honors freedom of speech but does not allow for defamatory, malicious or abusive language including intimidation, name calling, and bullying. Comments that break these requirements, including falsehoods and/or disinformation, will be deleted without notice. Bullying behavior will be blocked.
Follow PAJ@ http://portuguese-american-journal.com/
**Report a correction or typo to editor@portuguese-american-journal.com. We are committed to upholding our journalistic standards, including accuracy. Carolina Matos/Editor.