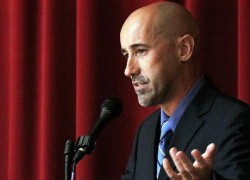 Photojournalist, Peter Pereira, was named ‘Photographer of the Year’ 2014, for Region One (New England), by the National Press Photographers Association (NPPA). He will receive the award on a public ceremony to take place on Saturday, March 14.

This is the sixth time Pereira has won the award and the fifth time in a row he earned the title, previously winning in 2006, 2010, 2011 and 2012, and 2013. Pereira is also a six-time winner of the New England Newspaper Association’s Photographer of the Year.

Peter Pereira, who is associated with 4SEE  and The Standard Times of Massachusetts, has had his work published in media such as The New York Times, the Los Angeles Times, and the Washington Post. His images have also appeared in  Newsweek, USA Today, Courrier International, Chicago Tribune, International Herald Tribune, Boston Globe, MSNBC.com, CNN.com, ABCNews.com, News Photographer Magazine, and various other international media outlets.

Pereira has also worked with a team of journalists to chronicle the live of Portuguese-Americans in Massachusetts, which led to the publication of A Nossa Vida: The Portuguese Experience in America (2006).

The National Press Photographers Association holds monthly contests for its members. At the end of each year, the photographer with the most points per region is that region’s photographer of the year.

Peter Pereira, who was born in Figueira da Foz, mainland Portugal, moved at age 9 to New Bedford, MA. He graduated from the University of Massachusetts at Dartmouth in 1992 with a degree in computer engineering. In 1998, he launched his career as a photojournalist. He is represented by the 4SEE photo agency.