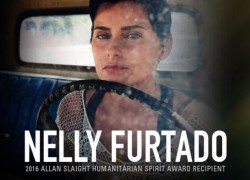 Portuguese Canadian singer, songwriter, actress, and philanthropist, Nelly Furtado, will be the recipient of the 2016 Allan Slaight Humanitarian Spirit Award. The award recognizes her social activism and support of humanitarian causes.

The award will be presented at the Canadian Music & Broadcast Industry Awards gala to be held on Thursday, May 5, at The Grand Ballroom of the Sheraton Centre in Toronto during Canadian Music Week 2016.

Nelly Furtado has supported numerous humanitarian causes relating to her Vancouver Island roots over the years, including The Land Conservancy of B.C. and the Victoria Youth Empowerment Society. In 2011, during We Day Toronto, Furtado donated $1 million to Free the Children for schools in the Maasai region of Kenya.

She has earned numerous awards and accolades, including a Grammy Award in 2002 for “Best Female Pop Vocal Performance”, 10 Juno Awards, three MuchMusic Video Awards and a star on Canada’s Walk of Fame. Furtado was awarded “Commander of the Order of Prince Henry” on February 28, 2014, in Toronto by Aníbal Cavaco Silva, the former President of Portugal.

Nelly Furtado, 37, was born in Victoria British Columbia, Canada, to Portuguese immigrant parents from the São Miguel Island, Azores.  She came to fame in 2000 with the release of her debut album Whoa, Nelly! which featured her breakthrough Grammy Award-winning single I’m Like a Bird. A record producer, singer and song writer, she has sold 20 million albums worldwide and more 20 million singles.