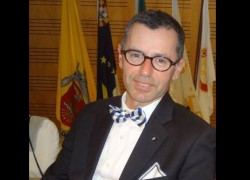 The ceremony took place at the House of Representatives presided by the President of the Senate, Stan Rosenberg, the Speaker of the House, Robert A. DeLeo, the Deputy Governor, Karyn Polito, and Charlie Baker the State Governor.

Every year, on the first Tuesday of June, the Massachusetts Senate celebrates the Day of Portuguese Heritage, distinguishing individuals who have contributed with their work to benefit the community. José de Almeida Mello is the first non-resident of Massachusetts to receive this distinction.

Historian José de Almeida Mello is the chief librarian of the Ponta Delgada Municipal Library and the cultural attaché of Ponta Delgada City Hall. He is also a prolific author of many books and monographs. He published Sahar Hassamain Synagogue in Ponta Delgada (2009) a book that tells the story of the Synagogue and speaks of the importance to preserve the Jewish legacy in the Azores.

The Sahar Hassamain Synagogue is the only surviving Synagogue on the islands and the oldest of Portugal’s remaining synagogues. It was established around 1820, by a group of Jewish entrepreneurs who migrated with their families from Morocco and settled on São Miguel island in the early 19th century.

Established in 1984, the Portuguese Heritage Awards is an annual event promoted by the Portuguese American Legislative Caucus recognizing the achievements of Americans of Portuguese descent in Massachusetts who have excelled and contributed to the welfare of the Portuguese community in the Commonwealth.

The Heritage Day of Portugal initiative was inspired by the spirit of Portugal Day, a Portuguese national holiday celebrated every year on June 10. The date honors the life of Luiz Vaz de Camões, Portugal’s national poet who died on the 10th of June 1580. Camões wrote Os Lusiadas, Portugal’s national epic poem celebrating the country’s 16th century maritime achievements. For the Portuguese people living abroad, Portugal Day is the time to celebrate their heritage and ethnic pride.

It is estimated that over 500 thousand Americans of Portuguese descent live in Massachusetts where the Portuguese language is the second most spoken foreign language after Spanish. They have settled in many communities across the state, mainly in Fall River, New Bedford, Hudson, Peabody, Lowell, Stoughton, Cambridge, Somerville, Ludlow, Milford, and Taunton.