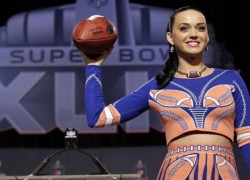 Portuguese American pop singer, Katy Perry, will be the main performer at the NFL Super Bowl halftime show, tonight, for an audience of over 100 million people.

The pop star sensation, who will be joined by Lenny Kravitz and Missy Elliott, will take to the stage at the University of Phoenix Stadium in Glendale, Arizona. The NFL Super Bowl is one of the most-watched special events of the year in North America.

To be designated for the honor, the performer is selected among the most popular entertainers in the world. Past  NFL event performers include superstars such as Madonna and Beyoncé. This year, the NFL halftime show will be a bit longer than the usual 15 minutes allotted to most NFL games.

During her career, Katy Perry was nominated for numerous major music awards with 13 wins of 27 nominations and has hit No. 1 on the Billboard Hot 100 nine times.

Katy Perry, 30, who has acknowledged her Portuguese heritage, was born in Santa Barbara, California, to parents of German, English and Portuguese descent, with roots in Horta, Faial, Azores.

Where: University of Phoenix Stadium in Glendale, Arizona