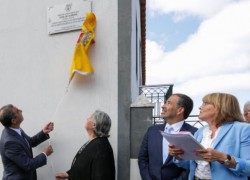 The City Council of Ponta Delgada municipally honored José de Almeida, the historic leader of the Azores Liberation Front (FLA), with a memorial plaque marking the house where he was born in Chão dos Medeiros, Remédios, Bretanha, São Miguel island.

Presided by the mayor of Ponta Delgada, José Manuel Bolieiro, the ceremony was a posthumous tribute recognizing the life and work of José de Almeida as a man who loved the Azores, and did not fear defending his beliefs.

Stressing the influence José de Almeida had on the political thinking, during Portugal’s revolutionary democratic process, started in 1974, mayor Bolieiro said that “the homage to José de Almeida is an act of justice and recognition to his personality and freedom of thought.”

“Believing and fighting for the independence of the Azores grows in the people who love this land and who believe that it would be much better if it were in the hands of the Azoreans,” he remarked. 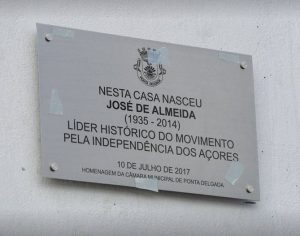 José de Almeida, was the leader of the Frente de Libertação dos Açores/FLA (Azorean Liberation Front). Launched in 1975, after the Carnation Revolution, the independence movement had a profound impact on the Azores and mainland Portugal during the period when the country feared a Communist takeover.

The movement gathered strong support among the Azorean immigrant community in the United States and had the backing of the CIA and the US State Department over concerns to protecting US interests in the Lajes Airfield on Terceira island.

Since 1976, after democracy was consolidated in mainland Portugal and a new Portuguese constitution delegated self-rule to the Azores, FLA’s activism has declined. Currently, as defined by the Constitution of Portugal, the Azores is granted its own political and administrative status.

According to the Azores sovereignty law, approved unanimously (2008) by  the Assembly of the Republic, the regional administration comprises of an Executive Branch (Governo Regional) and a Legislative Parliament (Assembleia Legislativa) elected by universal suffrage.