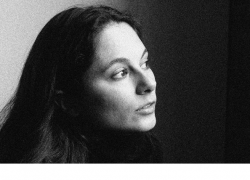 Portuguese composer Andreia Pinto-Correia was  awarded the ‘John Simon Guggenheim Memorial Foundation’ 2015 Fellowship, one of the most prestigious of the United States.

The award honors professionals who have demonstrated exceptional ability by publishing a significant body of work in the fields of natural sciences, social sciences, humanities, and the creative arts, excluding the performing arts.

In its ninety-first edition, the John Simon Guggenheim Memorial Foundation awarded 173 Fellowships  to a diverse group of 175 scholars, artists, and scientists.  The successful candidates were chosen from a group of over 3,100 applicants.

Born in Portugal, award winning  Andreia Pinto-Correia began her musical studies in her native Lisbon and received her Masters and Doctoral of Music degrees with Academic Honors from the New England Conservatory of Music as a student of Bob Brookmeyer and Michael Gandolfi. She attended the Minnesota Composer Institute, the European Network of Opera Academies (ENOA), the American Opera Projects (AOP), the Composers Conference, and the Tanglewood and Aspen Festivals.

Since its establishment in 1925, the John Simon Guggenheim Memorial Foundation has granted over $325 million in Fellowships to almost 18,000 individuals, among whom are scores of Nobel laureates and poets laureate, as well as winners of the Pulitzer Prize, Fields Medal, and other important, internationally recognized honors. View the announcement of the Guggenheim Fellows, April 9, 2015. For more information visit the Foundation’s website.