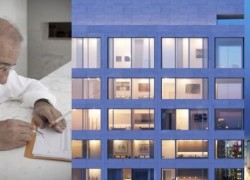 Álvaro Siza Vieira will add his name to the a list of famous architects who have left their mark on New York City, such as Frank Lloyd Wright or Frank Gehry.

The award winning architect visited this Wednesday the Lincoln Center in New York City, where he was interviewed by architecture critic Paul Goldberger about his career and the design for his first building in the United States.

The launching ceremony of the first stone has taken place a few months ago and the construction of the building should be completed within a year. The building was commissioned by two prominent New York developers,  Sumaida + Khurana and LENY.

The drawing task, which took over a year to complete, projects a 120 meters long structure which will incorporate 37 floors located at 611 West 56th Street, in Manhattan, in the Hell’s Kitchen neighborhood known for its high concentration of bars and restaurants.

The building will consist of approximately 80 residences between T1, T4 and penthouses. It also includes a garden on the roof, several private terraces, a spa, playground, and a movie theater among other facilities.

The art on display include works by sculptor Gonçalo Barreiros, painter João Queiroz, and works in ink on paper by Catarina Dias. The works of art will be later incorporated in the building.

Álvaro Siza Vieira was born in 1933, in Matosinhos, mainland Portugal. He began his professional life in 1955, after graduating in the Fine Arts School of Porto. His artistic talent was more rapidly recognized abroad than in Portugal, especially through the assignment of works such as the restoration of the Jewish neighborhood in Venice and of the Kreuzberg neighborhood in Berlin.

He was awarded many prizes: in 1988 by the foundations Alvar Aalto and Mies van der Rohe; in 1992 the Pritzker by the Foundation Hyatt from Chicago; in Portugal, the Secil Award for Architecture in 1996 and 2000, for the restoration of the Castro e Melo building in the Chiado area and for the project of the Information Sciences Faculty in Santiago de Compostela; the Golden Lion of the Venice Biennial for best project of the International Exhibition in 2002 and the Golden Lion for Lifetime Achievement in 2012; in 2002 the Arts International Medal by the Madrid Regional Government for the revitalization of the city center, among many others.

347 shares
Share this ArticleLike this article? Email it to a friend!
Email sent!