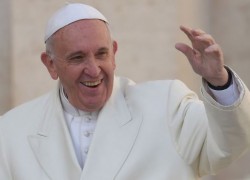 The President of the Government of the Azores, Vasco Cordeiro, was received today at the Vatican by Pope Francis to formally invite His Holiness to visit the Azores next year.

The meeting was held in St. Peter’s Square during the greetings meeting between the Pope and guests, after the end of the papal weekly public audience.

The visit would coincide with Pope Francis visiting Cova da Iria, Fátima, mainland Portugal, on the occasion of the 100th anniversary of the Marian Apparitions.

President Cordeiro, who was accompanied by his family, has stated, “From a personal point of view, the moment was quite striking and significant, representing the Azores and the Azorean people. I had the opportunity to greet His Holiness the Pope, to verbally and in writing address the invitation to visit the islands of the Azores.”

President Cordeiro also said that the meeting offered him the opportunity to present the Pope Francis with a Crown of the Holy Spirit, one of the “greatest symbols of religiosity of the Azorean people.”

“We look forward with great hope that the realization of the visit Papal will be possible. I have no doubt that this would bring great satisfaction and great joy to the people of the Azores,” he said.

In the Vatican, the President of the Government of the Azores also met  with Ambassador of Portugal to the Holy See, António de Almeida Ribeiro, and Monsignor José Bettencourt,  an Azorean prelate who is Head of Protocol at the Secretariat of  the State of Vatican.

Last year in August, the former Bishop of Angra do Heroísmo (Terceira) D. António Sousa Braga announced he had invited Pope Francis to visit the archipelago as part of the papal visit to mainland Portugal next year.

Fátima has been permanently associated with the Marian Apparitions that occurred in Cova da Iria, in 1917, where three shepherd children reported seeing the Blessed Virgin Mary between May 13 and October 13, 1917. The apparition reoccurrences were later recognized officially by the Catholic Church.