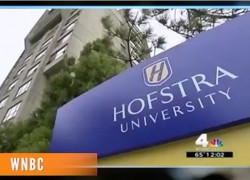 The suspect broke in the home she shared with her twin sister Jessica. Three females and a male were in the house at the time of the shooting.

According to a police report, the gun man knocked at the door of the home around 2:15 a.m.. After the residents looked to see who he was, he forced his way in wearing a ski mask and took the people in house hostages. After a woman in the house managed to call 911, within minutes the police was at the scene.

“Shortly after our arrival, a shooting took place where the suspect is killed and one of the female victims are killed,” Deputy Inspector Kenneth Lack of the Nassau County Police Department told The New York Times. The suspect had not been identified.

Andrea Rebello, a junior from Tarrytown, N.Y., was studying public relations. She was proud of her Portuguese heritage. The New York Times has reported that in a short autobiographical note on her blog, Andrea wrote, “I’m 100% Portuguese and have an identical twin sister so I guess that makes me kind of unique?”