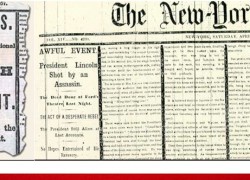 Did a mysterious Portuguese sea captain help plot Lincoln’s assassination, or was he an informer?  If he was not involved, why was João Maria Celestino captured by the Secret Service and put in jail for 82 days together with the main conspirators?

Portuguese reporter Jorge Castro has researched the story for Sábado news magazine and found some answers. Based on records from the time when the events took place (1865), Castro recounts how and why, five days after Lincoln’s assassination, João Celestino  a.c.a  “Jn. Celestine” was arrested  by La Fayette Baker, head of the American Secret Service, and how, after many trials and tribulations, he gained his freedom and sought to clear his name and get compensation.

“Conspiracy: The Portuguese arrested in connection with Lincoln’s assassination”

His story is not included in Spielberg’s “Lincoln”, but not for lack of intrigue. João Celestino spent 82 days in jail together with the chief conspirators. In the end he sought compensation from the American Secret Service – find out why … continue reading >>